The Symbolic Value of Buildings 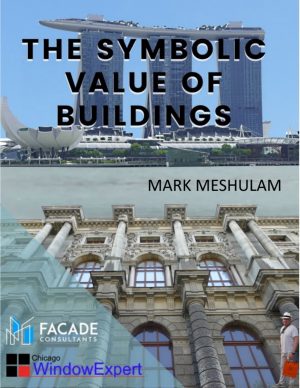 A visit to venerable European cities Paris, Venice, Florence and Rome imbues the traveler with a sense of history difficult to obtain in urban youngsters like Chicago, New York and Los Angeles.
City Planning
Here in Chicago we have only experienced our city’s destruction once – in the great fire. This destruction enabled city planners to re-draw the map into an understandable north-south grid with just a few spokes emanating from the downtown hub thrown in for good measure. This modern urban design, as unexciting as it may be, works well for traveling across town with wheeled conveyances. It symbolizes a modern, efficient environment, detached from the past.

Older towns have usually seen a number of large-scale destructions, but these occurred before the mixed blessing of automobiles, and were often rebuilt in the same pattern that had previously evolved. These cities tend to look like a sprinkling of overlapping wheels, where each hub is a piazza or gathering place, and the small streets emanate in all directions, intersecting one another as they go. This pattern can look confusing on a map, but are very friendly to foot traffic. This symbolizes a richness of experience rooted in history.
Glorious Buildings
Emperors through history deeply understood the meaning of buildings. Buildings were much more than a place to live, work, worship or be entertained. Nearly as important as these basic functions, buildings were also symbols. Buildings symbolized the might and wealth of the emperor, their ownership and mastery of the land.

Religious leaders understood that a glorious house of worship provides worshipers with feelings of awe, reverence and closeness with the deity. In the process of church building, religious leaders also gained control of land, wealth and power, and this power came to be expressed in the buildings too. An interesting battle of building symbolism could evolve in this environment, where government and religion competed for the minds of the target audience, the populace.

Destroying Building Symbols
It is no surprise that attacking forces through history have focused not only on the subjugation of people and the plunder of their wealth, but also the domination, and even destruction, of their buildings. In the minds of attackers old and new, “I will control you by controlling your structures”. World Trade Center terrorists took the concept further, “I will destroy your people by destroying your symbolic structures.”

One might make the argument that older cultures relate more to building symbolism than do recent cultures. We in the U.S. have the ability to relate to such obvious icons as the Statue of Liberty, Ellis Island and the Golden Gate Bridge for their symbolic value. But let’s be honest. How many of us viewed the World Trade Center for symbolic value beyond the technical expertise involved in constructing these sleek, tall towers? We may not have seen the WTC as symbols of American might or financial power, but the bad guys certainly did. They were so affected by that symbolism, they were willing to die to eradicate it.

Marketing: Shaping Building Symbolism
Modern marketers know that, contrary to the old days, enhancing the value of an edifice requires much more than just piling on yet more statues, artwork and arches. Although these things still resonate, we look increasingly for not only basic comforts, but also “amenities”, “finishes”, efficient transportation and the newly added “high speed communications”. Just as we see convergence in our phones, radios, music players and tvs, we will see further convergence within the building itself. Form will follow an expanded function. Classical forms will fade farther in the background in favor of esthetics that don’t even exist yet. As our convergence ties us increasingly to the “cloud”, our buildings will be more and more in the cloud, too. How much of the ultimate physical entity, a building, will we be able to shove up into the cloud?

Size Matters
Even in current times, we see competition on the playing field of architectural symbolism: who has the tallest building? Malaysia built the enormous Petronas Towers and immediately gained recognition as a world class economic power. The incredible feats of construction taking place in Dubai have done much the same for them. “We’re not just oil and sand dunes any more”, they are telling us.

Building symbolism is alive and well in emerging nations looking to make their mark. These places may have had the financial wherewithal to create great structures, but they needed to import the expertise.
And what of our symbolism? Is our dearth of tower cranes sending a world-wide message? Does the exportation of our architectural and engineering expertise to distant corners, assisting others build symbols of their greatness send a message? Are we the conquerors or the conquered?