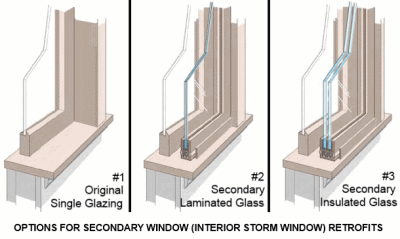 Mark Meshulam is an expert witness and consultant for window condensation.
Here’s what happened after one of Chicago’s typical cold snaps:

This week Chicagoans experienced our first brutal blast of winter. Temperatures dropped from an average of 30°F to almost 0°F in a single day. Windy City winds dropped the wind chill to minus 20°F.

A steamy Lake Michigan reacts to the cold

Our buildings reacted to the first big chill with shock, too. Windows that behaved well for months were unveiled this morning looking like scenes from a winter wonderland, coated with frost, ice and beads of window condensation. Patches of snow pack clung to our mullions. How did our world go topsy turvy so quickly? Why was it raining and snowing inside our homes?

The answer is science, my friends. The result of a simple equation with only four variables:

If you tweak any of these variables beyond their designed limits, sooner or later window condensation, then frost will appear on your windows. Interestingly, we can control three of the four variables. Exterior temperature alone is in the hands of the Almighty. 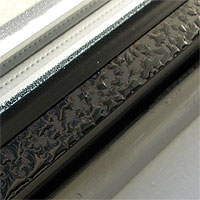 Condensation, including window condensation occurs when water vapor (a gas) in our air undergoes a temperature drop, such as when moist air moves across a very cold window. As the temperature of the water vapor descends, it eventually reaches its “dew point”, the point at which water vapor changes into liquid water. The liquid water forms on the cold surface, and can accumulate there in large volumes as more and more moist air circulates past the window.

The effect of interior temperature on window condensation

If room-side heat is allowed to flow across the cold window surface, it will heat the window, causing the window’s surface temperature to rise. As it rises, it will eventually cross the dew point, then condensation will no longer form on the window surfaces, and window condensation that is present will begin to revert to a vapor state, also known as evaporation. 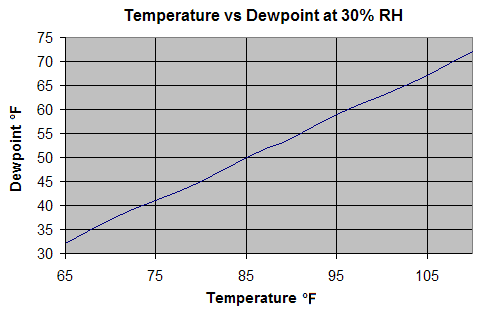 Relationship of dewpoint to temperature with RH held constant

And so, if all other variables are held constant, generally a higher interior temperature will result in less window condensation. This will only work if the room-side heat can actually reach the window surface. Blinds and curtains can have the effect of blocking room-side heat, and in extreme conditions must be left open.

The effect of interior relative humidity (RH) on condensation

Generally, as the interior humidity goes higher, so goes the dewpoint. Holding the interior temperature constant at 70°F, compare these two cases:

And so, if you want to reduce condensation on your windows, reduce the interior humidity. 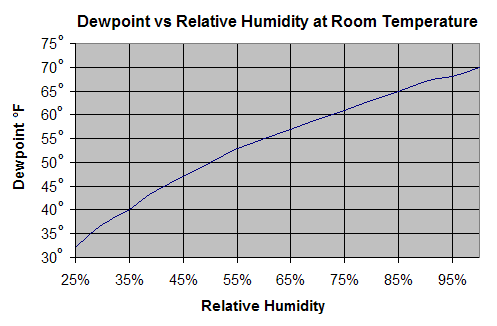 With that introduction, here are…

Fix #1: Control the humidifier
As the outside temperature goes down, so should your humidifier setting. Here are industry recommendations:

Fix #2: Use bathroom exhaust fans
Showers pump a lot of moisture into the air all at once. Run the fan during and 1/2 hour after the shower to expel the moisture before it reaches the windows. At this point we are NOT recommending going unwashed. Recent revelation on this point: if privacy permits, crack the door open to allow more air supply into the room. This will make the exhaust fan much more effective. If this isn’t practical, cut a louver into the door (preferably at the bottom), or cut 3/4″ off the bottom of the door. Door undercuts are a well-known way to allow air to move from room to room. 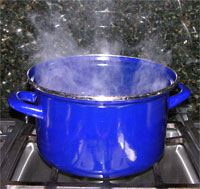 Steam from cooking can humidify the air

While we do recognize the occasional need to eat, we wish to point out that cooking also places substantial humidity into the air in a sudden way. Run the exhaust fan during and for a short time after the oatmeal is cooked. If you have a “ventless” range hood, don’t kid yourself, it won’t help with this problem. It will just dump the moisture right into the living space.

Fix #4: Use laundry exhaust fans and NO “ventless” dryers
Washing machines and dryers add moisture to the air, so run exhaust fans if you have them. If not, open the window a bit. Always duct the dryer to the exterior. If you have a “ventless dryer” make sure it has a condenser that captured and drains all the water into the drain and not into the air.

Fix #5: Direct the heat to the window
Best practices dictate that the heat source, such as a baseboard heater or supply register be placed beneath the windows to warm them in order to reduce window condensation. Sadly, most buildings I see do not fully implement this idea. Even where such design exists, too often the depth of the window sill prevents the convective air flow from contacting the coldest part of the window, the bottom.

A corollary to this postulation (I love saying that) is: Arrange your window treatments so that they allow warm air flow between window treatments and window. One of the grand ironies of physics is that while draperies do a great job of keeping heat away from the window, they do not keep room-side moisture away.  Curtains are insulators but not vapor barriers. A phenomenon known as “vapor drive” continues to push moisture into that space, just so that you can be surprised in the morning when you open your drapes and find penguins living there.

If your home is lacking a heat source at the base of the window, add a baseboard heater or space heater below the window. Be careful not to let flammable materials touch any heat source.

Fix #6: Be aware of construction moisture

Construction products such as paint, drywall joint compound, and even fresh lumber and concrete will continue to release moisture into the living spaces and may become window condensation. It can take a year or more for a building to achieve its “service equilibrium”, so don’t freak out when you frost up after expensive construction.

Window purveyors are also aware of a perverse situation in which we retrofit new energy efficient windows into an existing building and they immediately frost up. This causes consternation to the buyers and sometimes reduced cash flow to the purveyors. The reason for this cruel twist of fate is that the previous windows were so leaky that they allowed the evacuation of large amounts of moisture right through the windows, keeping room-side humidity low. The new windows tightened the envelope, capturing the high humidity levels and window condensation ensued. Education, and adjustment of the HVAC system can usually fix this problem. 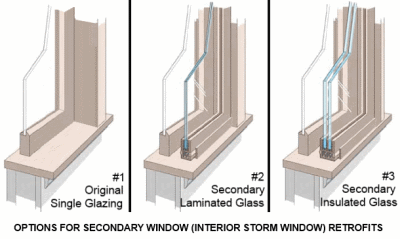 Interior secondary glazing, also called an interior storm window can work extremely well for improving window U factor as well as for reducing cold air infiltration. It is particularly applicable in institutional buildings such as schools and hospitals, in office buildings, in historic buildings and in buildings with curtainwalls. To read more about this excellent option, go here: Building Energy Benchmarking and Window/Curtainwall Retrofit Part 2

Fix #8: Tighten window air infiltration
With all the talk of R values and U Factors out there, poor little air infiltration has been grossly neglected. Fact is, a window that allows the passage of excessive air will bring to waste most of your insulating efforts. On a cold, windy day, run your hand all around the window and try to find air movement. The feeling of a light breeze on your hand can mean big energy losses. That same breeze can chill the inner window surfaces and promote spots of greater condensation and frost. Seal breezy areas with caulk. If it is at an operable portion of the window, replace gaskets or add foam blocks to fill the hole. Or call us and we will do it.

Fix #9: Fix the perimeter caulk
Breaches in perimeter caulk can bring cold air to the interior plane of your window, exactly where you don’t want it. Make sure your outside caulk is doing its job.

If you were Superman and had X-ray vision, you could get rich and hire someone to read this article for you. But in addition to that, you could look inside the walls immediately surrounding the window and you would discover a startling fact: there might be empty space in there! If you have a masonry wall, there is almost always a space behind the brick. This space could be quite large, extending unobstructed behind all of the brick. Other wall designs also have such a “wall cavity”.

The reason this is important, is there can be huge amounts of cold air circulating in the cavity. This cold air can chill your window frame or blow around the frame into the room, bringing window condensation and energy losses. To fix this, first understand it, then develop a reasonable plan of attack. Recently we have become involved in remedial methods that involve injectable foam, retrofitting compartmentalization into walls, and sealing interior joints. If this sounds like a solution for you, give me a call!