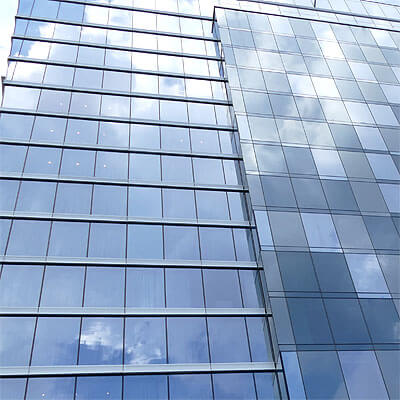 Incident description: Owner of Hotel and Casino asserted a claim against the Curtainwall Contractor because soon after building occupancy, there were several instances of glass breakage that appeared to be spontaneous. On one day, for instance, a number of panes broke. When the glass fell down, some of it broke many panes on a glass canopy and one pane on a nearby storefront. The Owner felt the glass breakage was due to nickel sulfide inclusions in the glass. Nickel sulfide inclusions are stone-like impurities which are present in most window glass in small amounts. In tempered glass, due to a change in size of the stone under certain conditions, the inclusion can break the glass spontaneously.

Site investigation by Façade Consultants: FC visited the site at a time when the Hotel was occupied and the Casino was in full operation. There were two swing stages on the building which were alternately used by the consultants to document punchlist items, and workmen who were fixing the punchlist items. There was a lack of agreement between the consultants and the contractor (FC’s client) regarding percentage of completion of the punchlist work. In order to support the Client’s position, FC created a reporting form, keyed to stage drop locations and instructed workmen on the use of the form. As the project progressed, FC collected and aggregated the forms for further use by the Client.

Façade Consultants created a two-part reporting form. Part 1 (upper) assigned a unique location number to each glass panel, and provided a place where workmen could manually locate their swing stage as the work progressed. Part 2 (lower part of image above) provided spaces where work on each panel could be tracked. Work items were keyed to an already existing repair procedure.

The issue of alleged spontaneous glass breakage was investigated. FC gathered and catalogued known instances of glass breakage and offered most likely causes based upon the available facts. In actuality, there was only one proven instances of a nickel sulfide inclusion break. This was partially because neither the Hotel nor the consultants took action to stabilize and preserve glass when it broke. Instead, days went by until the broken glass pieces fell from the opening, rendering it nearly impossible to diagnose.

Another factor that became apparent was the occurrence of a batch of glass breaks that occurred in the same timeframe. This is highly unlikely with nickel sulfide breaks, and instead points to a weather event. Upon research, FC discovered in the suspect timeframe, a thunderstorm that suddenly arose with 46 mph wind gusts. Further, a construction site next door had many small stones on the ground, which could be swept up in a wind storm and break the curtainwall glass. 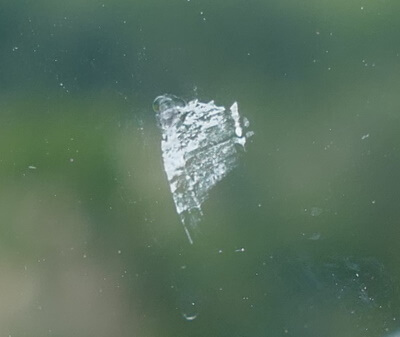 Abrasion found on the exterior face of the inner pane of an insulated glass unit, wherein the outer pane broke during a sudden storm. This is evidence that projectiles, probably stones were flying around even after the outer pane shattered and fell out.

How do we know this glass was broken during original manufacture? Because this is a view from the exterior. The outer pane is fine. The inner pane is broken, with cracks emanating from the corner. Edge damage is a near certainty, except this glass was glazed into the frame with structural silicone long before delivery or installation. The corner was chipped at the factory, but the full-fledged fracture could have happened later, even after installation

When some broken glass came down in the weather event, it broke canopy glass below it also. A few units were broken near penetrations for a large sign placed over the glass. Finally, there were some glass panes that were found to have been broken during original construction and were to be replaced as a part of the punchlist.

Opinion of Façade Consultants: With proper reporting in place and operational, the Client had proof to support his Pay Request and representations of Project completion. FC’s analysis of the glass breakage, wherein only one glass break could be attributed to nickel sulfide inclusions while many and other breaks could be attributed to original construction and a wind event, helped the Client put the glass breakage issue in a better perspective and move toward an equitable resolution.