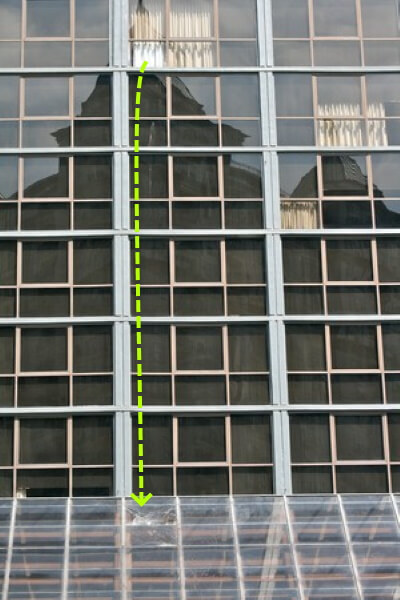 Property type: Hotel
Location: Atlanta, GA
Client: Attorney for Plaintiff (Family of Deceased)
Incident description: 30 year old female hotel guest was hosting a small birthday party in her 10th floor hotel room. She and a friend were crouching near the room’s floor-to-ceiling windows. The pair leaned against the glass, which suddenly and unexpectedly broke, allowing both women to fall backward through the window: 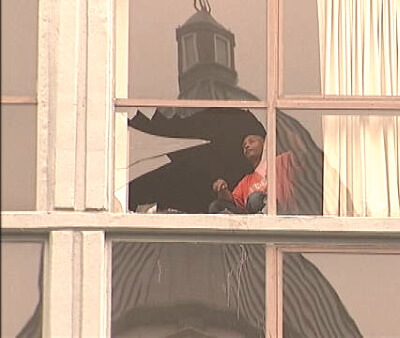 The female landed on a skylight 5 floors below and died: 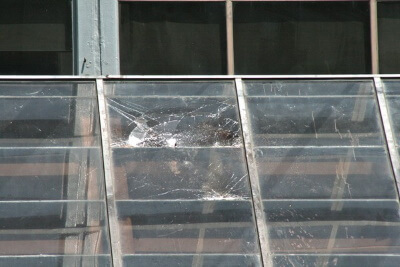 The friend rolled down the skylight, then fell an additional distance to the sidewalk. She survived with permanent injuries. The window glass was approximately 45″ wide x 37″ tall x .190″ thick. The floor level glass was not tempered or laminated.

First Site Investigation by Façade Consultants: FC visited incident the hotel room. The entire exterior wall of the room was floor to ceiling window wall with a horizontal mullion at 39.5″ height from the floor. Most noticeable were three factors: a) the interior glazing gaskets were shrunk back and clearly not providing much support to the glass, b) The outside of the glass was “cap beaded”, which means the glass was caulked around the edges to the frame and c) there was another pane of glass in the same room that had a crack. 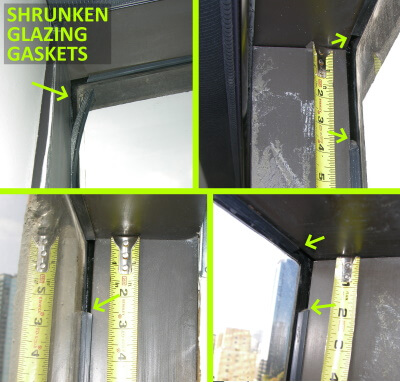 Shrunken glazing gaskets were prevalent in the incident hotel room. This indicates that glass is poorly supported and maintenance is poor 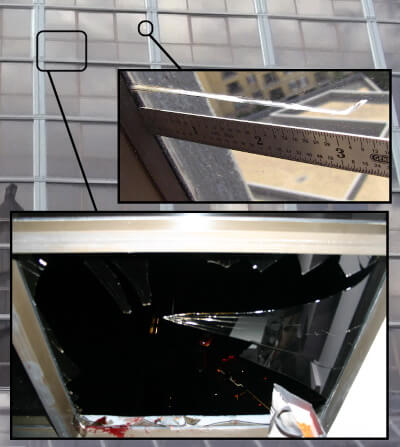 Police photo of broken incident window taken from the inside. Above right: Crack in glass found during inspection following incident. The crack was dirty, indicating it had been there, unrepaired, for years, suggesting poor maintenance. Cracks in glass are known to weaken glass. Did the incident glass give way too easily because of pre-existing damage?

Second Site Investigation by Façade Consultants: FC attended a forensic exercise in which the glass with the 3″ long crack was removed. A chips at the edge of the glass that propagated into a crack was from original construction, decades before the incident.

Fragment Examination and Attempted Reassembly: FC created a scaled, full size template of the broken glass shards that were recovered from the incident. Some crack edges were extended and three possible crack convergence points were found:

This template was used for an attempted reassembly of the shards. The purpose was to determine if fractographic evidence could reveal whether there was pre-existing damage to the glass. We were not able to positively locate crack origins, but it was worth a try: 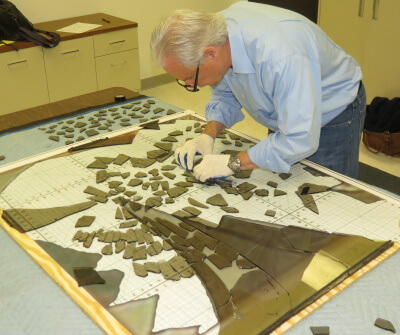 A tin-side detector was used to place the shards in the proper up/down orientation: 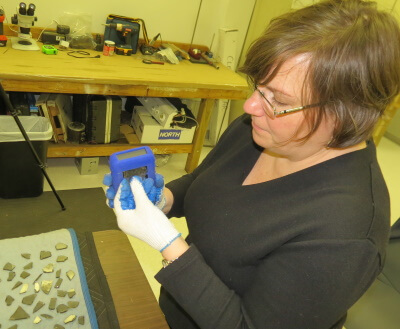 All glass fragments were catalogued: 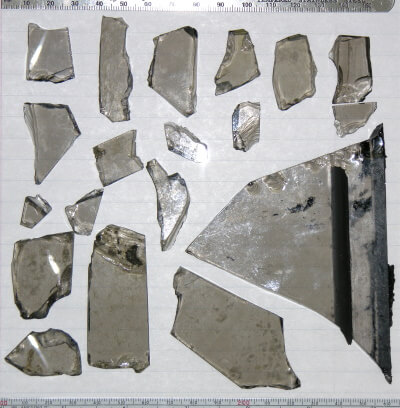 Glass Impact Testing: FC designed a test protocol to measure the ability of glass to act as a barrier against human fall-through. The CPSC-16 CFR Part 1201, Safety Standard for Architectural Glazing Materials was used to the greatest extent possible in order to avoid reinventing the wheel. In this test, a 100 lb punching bag is swung against the face of a glass pane in order to evaluate the glass behavior from various heights: 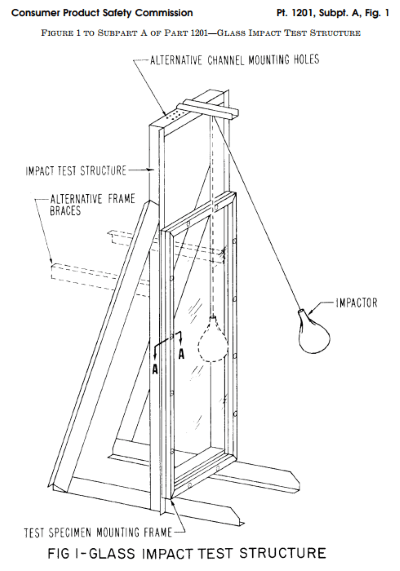 The vertical component of the swinging bag determines the impact force in foot-lbs. For instance, a “drop height” of 1 foot provides 100 foot-lbs of impact (100 lb bag x 1 foot drop). In the 16 CFR 1021, only 18″ and 48″ drop heights are used (150 and 400 foot-lbs respectively). FC’s first modification to the protocol was to start with smaller drop heights, then ramp up with repeated impacts. The other modification was how the breakage was evaluated. We were interested in the point at which the glass ceased to act as a barrier against human falls. We called this point “break-through”. 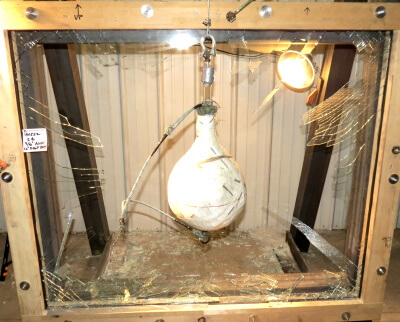 When annealed glass breaks, it breaks into large, dagger-like shards and evacuates the opening readily. Once broken, if offers no resistance to a person falling through, except for cutting the person on the way with the daggers that remain in the frame, like this: 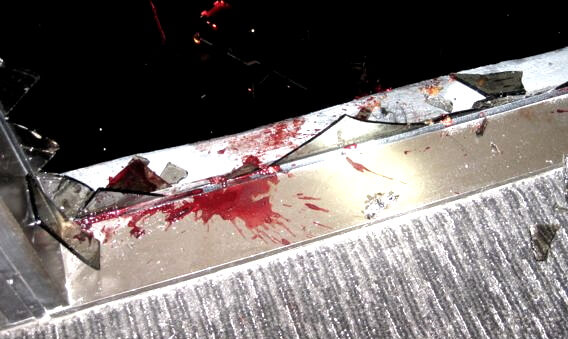 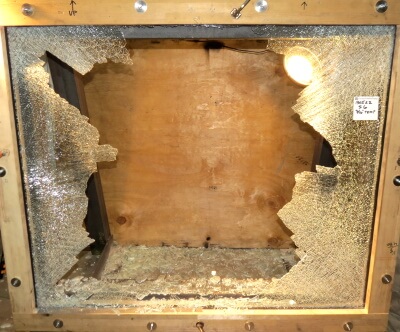 Tempered glass is far stronger against blunt impact than is annealed glass. Our small study suggested it is twice as strong. When tempered glass breaks, it breaks into hundreds of tiny cubes by design. The cubes cut you less severely than do the large shards, but they easily leave the opening, providing no resistance to a person falling out. 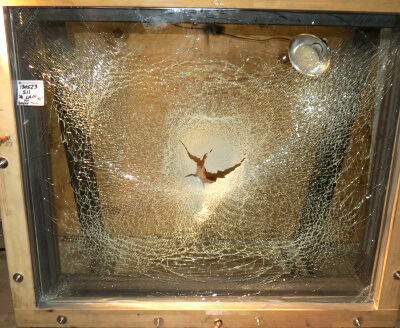 The laminated glass we used (1/4″ thick with 2 thicknesses of 1/8″ glass) actually cracked under impact quite readily, but because of the PVB (polyvinyl butyral – a plastic sheet), the pieces held together and did provide a greater resistance to falling through than any other glass type. 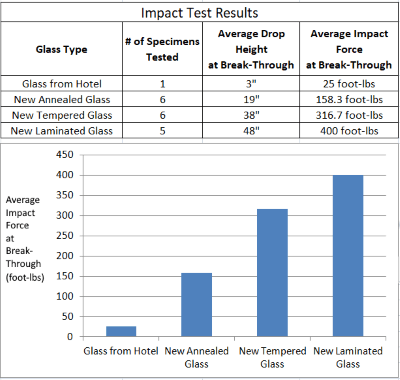 Why did the Hotel glass break more easily than the new annealed glass?
Glass “weathers” over time. Exposure to the elements actually makes the glass weaker over time. Glass engineers add a weathering factor to their calculations, wherein a 20 year life span is contemplated. The problem here, and in many other older buildings, is that the Hotel glass was 37 years old at the time of the incident, nearly double the age considered by any glass strength calculation. Consider these facts: 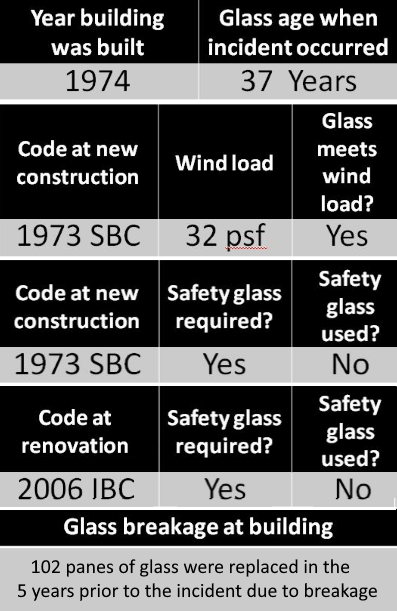 Although the glass met wind load requirements, it did not meet safety glazing requirements in either the original construction or a later renovation. Most telling, there was an ongoing history of glass breakage in the building in the years prior to the incident.

Opinion of Façade Consultants: The building ownership and management failed in their duty to provide a safe place for guests to reside. They not only allowed the windows to remain in poor repair, but they also failed to recognize or warn guests that the glass was weakened and breaking. Safety glass should have been used in the floor level application. These failures are proximal causes for the tragic death and injury that took place.