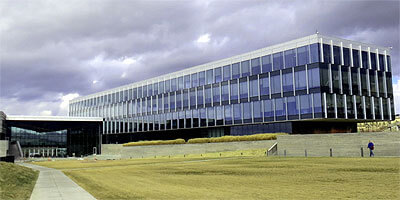 Incident description: The building was built in 2012. Three glass panes broke during 2013 and 2014. Then in 2015, 6 panes broke. This prompted the Property Management Company to reach out to Façade Consultants for guidance.

Site investigation by Façade Consultants: FC visited the site in 2016, four years after construction. FC took note of the various types of curtainwall and window conditions, some aspects of system weakness, surrounding geography and weather conditions, and catalogued prior instances of glass breakage.

These were the different glazing types:

There were only a few pictures and glass shards available for examination. For example:

During the site inspection, FC noticed strong and variable winds at the site. A check of the local data confirmed this: During the inspection the wind came out of the north at about 6mph. One hour later the wind came from the south at 29mph. An examination of the local geography revealed that the site (and Lehi in general) is in a constriction between two parallel mountain ranges. Constrictions in air flow tend to accelerate the wind.

The Building Amplifies the Wind

Rather than designing a building that might mitigate the effects of the wind, building designers went the other way. Dramatic architectural features such as overhangs, a tunnel, lots of corners and decorative fins stand right in the path of the wind, taking a beating daily.

Opinion of Façade Consultants: The absence of fracture origins has limited FC’s ability to provide a positive diagnosis of the causes of glass breakage. We have only background information and some theories. In the event of future breaks, better procedures need to be implemented. FC produced a 2-page questionnaire and instructions in the event of future breaks and recommends that the protocol be employed if more glass breakage occurs.