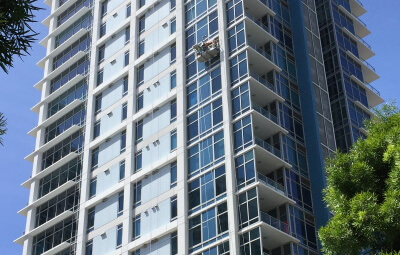 Incident description: Fire rated glass and frames were supplied to a window contractor for use in a new building. Fire rated windows were required by code due to the adjacency of the next building to the south. The frames were installed first, followed by the glass due to the weight of both elements. A number of years after constructions, complaints were made about visual imperfections in the glass, including visual distortion such that buildings in the distance looked curved rather than straight.  Other issues included the presence of a powdery substance around the glass edge or a flat bubble appearance in the glass near the edges.

The glass makeup consisted of three panes of glass. The outer airspace was filled with dry air. The inner airspace was filled with a clear gel that is designed to repel the transmission of fire. The frames had a core of steel tubing overlayed with dense drywall encased in steel break metal at the front and back of the glass unit. The sill detail showed the frame to be weeped to the exterior.

Site investigation by Façade Consultants: FC inspected 33 windows with a total of 66 glass units. Initially some of the reported distortion was difficult to observe. By varying viewing distance, viewing angle, what was observed through the glass and also by moving one’s head side to side, FC became sensitized to the reported issues.

The Project Specification called for “no visible flaws” in the glass, but without referencing an evaluation method. In search of guidance, FC referred to ASTM C1036, Standard Specification for Flat Glass. However, this was of limited use because the C1036 is used only to view single thickness (monolithic) glass. The subject glass was actually three layers, and with an additional layer of fire gel. The only relevant guidance was the viewing distance (4.5 meters) and the varying of viewing angle during the observation. About 20 glass units were found to have negligible visual issues. The others had observable issues.

A team of local glaziers removed one pane of glass while experts observed. The removed glass had some  distortion, two bubbles in the gel along the bottom edge of the unit and also the appearance of the powdery substance at the bottom of the glass.

Upon removal, it was found that the glass was sitting in water. It is known in the glass industry that the space beneath the glass must be drained (“weeped”) because if insulated glass sits in water too long, the seal around the edges will fail.

Further disassembly of the glass revealed that the seal around the glass edge was deteriorated at the two locations where bubbles appeared in the gel, and where the powdery substance was present. It then became clear that the insulated glass was failing due to immersion in water, allowing the fire gel to leak out. The dried gel was probably the powdery material. The visual distortion occurred as the gel left the unit, the adjacent glass panes deflected toward one another to fill the void.

Opinion of Façade Consultants: Curved distortions, bubbles in the gel and powdery substance at the glass edge are all symptoms of failure of the edge seal of the glass unit. The edge seal failed due to long-term immersion in water. The window shop drawings showed how weepag(drainage) e was to occur at the bottom of the glass, but apparently this was not achieved by the glazing contractor. Linear distortions were due to roller wave distortion, a common issue with tempered glass.

Disposition: Despite the probability that the glazier did not maintain a weep path when glazing the glass in the frame, the glass manufacturer provided new glass where it was failed. The glazing contractor provided the labor. There may have also been a monetary settlement. ­­­­­­­­­­­­­­­­­­­­­­­­­­­­­­